A Winning Approach Outshines the Competition 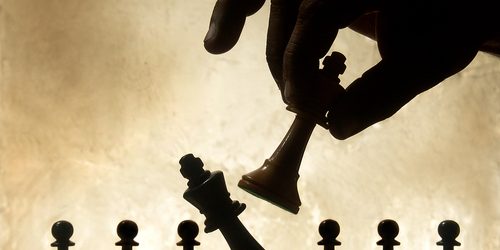 The success of any endeavour is hugely influenced by the quality of the approach taken. Whilst some deliver with élan, others fail pitifully. The injection of constructive competition can stimulate energy and challenge participants to raise their game.

The approach to a project or service captures the essence of the way in which the objectives and outcomes are to be achieved. Why is it that so often seemingly intelligent people go along with a half-baked plan that would never withstand serious scrutiny? How can you avoid such a trap?

The skilful soldier does not raise a second levy, neither are his supply-wagons loaded more than twice.

An approach can be developed quickly. It is common to sketch out several before deciding which is the best and having selected the preferred, proceeding to plan in detail. It is not therefore a substitute for planning, but a step in the process that leads to the plan.

Occasionally people dive straight into the detail of planning and scheduling without ever having established an approach.  Or just as bad, go straight into the doing. You can just let the approach emerge – many do most of the time. Deliver and rationalise your plan afterwards. This is fine as long as you do not need predictability, risk management or control of your schedule. For a trivial task, this is often fine. For a significant one, it is disastrous.

“In preparing for battle I have always found that plans are useless, but planning is indispensable.” –
Dwight D Eisenhower

The act of planning stimulates the mind to anticipate. Questions are asked and answered. What needs to be done? What might get in the way? How could we do it? What are the constraints? What has to be done first? By working out several approaches and testing them against intelligently developed criteria and each other, a good solution may be developed and tested before resources and reputations are committed. This applies just as much to service management and to the design of governance as it does to projects.

Business people do not often turn to either the military or politics for aspirational examples, although the practice that became business strategy owes its genesis to these two. An instructive example was seen in the UK in the summer 2014 campaign preceding the referendum in Scotland on independence. The two sides set out their approaches and criticised the other. The public could generally not cope with the details of plans. They wanted to know about the essence proposed by the parties and judged whether each was credible and desirable. The outcome was that the side that won the desirability argument amongst most Scots (the nationalists) lost the credibility argument.  The Unionists very nearly lost the day by spending too little time on desirability. In a desperate move just before the vote they changed their approach to the question (devo-max). There is nothing in the rules to say that an approach cannot be changed.

The development of an approach serves to demonstrate that the essence of the proposal is sound and worthy of support. It provides the coordinating vision that helps each party to its delivery understand their role and how to work along-side others in the delivery of the objective. In a trivial task, an approach may be developed in minutes and rapidly evaluated before proceeding to implementation. In a mighty endeavour with multiple considerations, dependencies and interactions, the act of generating and testing the approaches may take months and cost millions. Frequently, such testing is done through competition. The approach is refined throughout. This is a mechanism that I am very much in favour of, whether adversarial means or through principled discourse. The crime is to choose without undertaking testing that is proportionate to the weight of the decision.

The purposes of developing an approach include the selection of the means by which an endeavour is to be pursued. In assessing an approach, I suggest the following tests:

The team advocating the approach must first convince itself, then go on to win over others. It must address their hopes, fears, perceptions, as did the politicians in Scotland. The side that wins must have the best approach, and communicate it most effectively.

When an approach fails, causes can often be traced to its violating one or more of the above. The act of scoring several candidate approaches encourages the early attention to and remedy of weaknesses. If you have only one approach, your best option can still be a sad and sorry offering. Generate a healthy range and use the scoring to suggest how to take the best of each to make the final selection the best of all.

An assignment I worked on with colleagues was notable for the frequent and lively challenge that ran through all elements of the service development and delivery. When a major decision came up, the project leader would convene a “court” with advocates for the opposing options each required to stand their ground and argue their case. Each point was hard-fought. The underlying rule was that the right decision was the one that delivered the greatest return. After 2-3 hours in that pit, relationships needed to be repaired in the bar. It was brutal but efficient and effective.

An outsourcer for whom I worked used to conduct bid reviews in the manner of a blood-sport. Before finally approving a bid for issue to the customer, the company required review to ensure that the business was good, offered adequate return and satisfied risk criteria. The knowledge that the CEO took no prisoners encouraged bid teams to anticipate the questions and prepare responses, building elements into the approach where appropriate.

The process of running a competitive tender is a form of external challenge. Through this mechanism the organisation seeks the generation and articulation of competing approaches, on the basis of which (including their cost, risk, quality assurances) the customer awards the business. The bidders use their developing knowledge of customer need through the process to define and refine their approaches. Such exercises may be conducted with skill and perceptive understanding of real need, or they may not.

In an HBR article on decision-making, Levallo and Kahnemann [Ref 2] propose the following measures to avoid bias, useful in assessing the validity of estimates:

The quantified experience may be used moderate the enthusiasm of claims. If the last three times a comparable project was undertaken they took four, five and four months, what is it that leads you to expect that this time it can be done in two? Unrealistic optimism affects both bidders for new initiatives and those who allocate resources.

The ideal for all is if the team charged with proposing the approach has itself subjected its proposal to thorough internal challenge before taking it forward for final approval. A Finance Director for whom I worked as a young accountant took this to extremes. By the time we had prepared the full budget pack for the year, we had around 900 slides. We fully expected only 50 ever to see the light of day. The remainder had been prepared principally for our own benefit to show ourselves and the FD that all eventualities had been covered. We all knew that probing would come, and that if three questions were fired and that if each could be robustly and thoroughly addressed, that all would be comfortably accepted. The board would have performed its duty of scrutiny and the rest of the approach could confidently be taken on trust. A board that does not probe this way is negligent.

Customers get what they deserve. They need the skills, education and attention to act intelligently in reviewing and approving an approach.

In an important decision one must not only have a viable approach, but the best available. It is in this that the generation of a large range of potential options is vital. It is immensely helpful if the candidates are sourced well. Turn to the ignorant and the chances of finding wisdom are not good. Such people do not know good practice, so make silly mistakes and omissions. They have little education or experience upon which to draw in managing risks and have to generate plans from first principles alone.

The quality of retained management and governance is vital in assessing the quality of approach and in holding a delivery party to account. It is nigh impossible to assess the quality without having access to trusted advisors independent of the supplier who can assess it thoroughly. Many disciplines must be reviewed in this way: commercial; project; technical architecture; business change; operations. A myopic expert blunders outside their field, lending false comfort.

Having determined the approach to be taken, it must be resourced appropriately to deliver in accordance with the plan. So often a good approach is sunk in the delivery by under-resourcing either in quality or quantity. A good approach makes clear what is necessary and the consequences of failure to carry-through. “You have my complete support” but no provision of people, money or time, is no commitment at all.

One of my favourite tests of an approach comes from the field of benefits realisation, commonly known as the “Four Ares” [Ref 3]:

Making sure that you have a sound and credible approach that has been tested against good practice and experienced review to ensure it is the best available is an essential role of governance and management. Why would you ever settle for less?